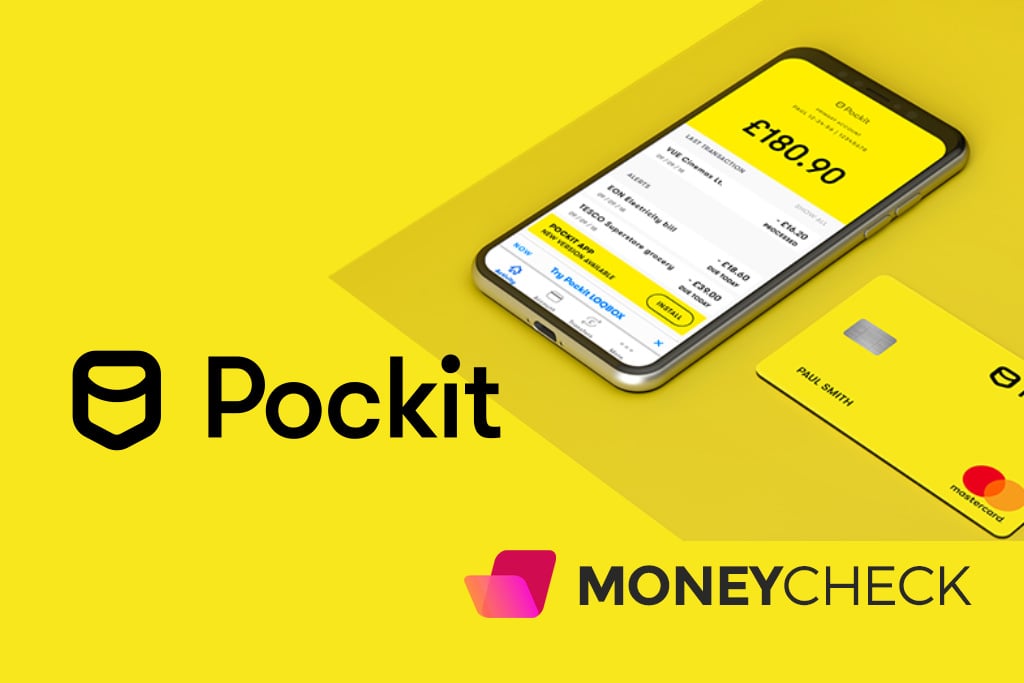 In this brief guide, we are going to talk about Pockit. What it is, how it can help you if you can’t currently open a bank account and its features.

Pockit is a simple easy to use prepaid current account which works from an app, it was founded in 2014.  The Pockit website claims you can open a Pockit account in under 3 minutes and begin to take control of your financial life. Pockit is based around getting people who are financially excluded access to a bank account. It does not come with an overdraft facility or any credit facility.

People who are financially excluded will usually not have good credit scores or any credit history at all and this may make it very hard for them to get a bank account.

With Pockit you can pay in cash at over 28,000 local shops, you will have a sort code and account number which you can use to get your wage paid into or receive benefits from the government, or receive money from friends and family.

Pockit also allows you to track your spending and because it should register on your credit file as a bank account which you now own, you should see your credit score rise.

You will also be able to pay your bills through direct debit with Pockit. This should help you avoid missed or late payments.

You can also block your Pockit card through the app which means if you ever lose your card you can instantly block it.

There is also a 4% exchange fee.

With Pockit you can send money to most countries aside from India due to local law.

You can also use your Pockit Mastercard in most countries aside from Brazil due to security reasons.

Pockit also has some extra features such as its partnership with Loqbox and its Pockit cashback offers.

Pockitloqbox is the partnership between Pockit and Loqbox. It is essentially just a lead generation campaign by Lowbox but for some reason, Pockit is charging their users a hefty £9.99 to open the Loqbox and then £0.99 to put money into the loqbox. This £0.99 fee can be excused as their standard direct debit fee.

You can alternatively use the Loqbox service which is free to use from Loqbox directly.

Loqbox helps you build your credit and build your savings by putting money away each month which replicates the effect of repaying a loan and is registered on your credit file as such.

With Loqbox you decide how much you want to save and put this amount away each month for 12 months.

If after 12 months your credit score hasn’t gone up then Pockit will refund your setup fee.

If you find that you are struggling to make your Lockbox payment then you should unlock your loqbox immediately to avoid missing a payment and having a missed payment recorded on your credit file.

With Pockit you can also earn up to 10% cashback on your purchases with particular stores. You can see a full list of stores which you can earn Pockitcashback here.

Pockit aims to pay your cashback within 60 days.

Pockit has four stars out of five possible stars on its Trustpilot review. It has received over five thousand reviews.

Extracts of Pockit reviews on Trustpilot

A 1 star review on Pockit.

“  I am absolutely furious with Pockit!!

I am absolutely furious with Pockit!!! I have been Pockit for about a couple of months now and I had important money transferred into my account. As soon as it was transferred I could not access my account atall. I tried to log into the app several times but a message came up saying my account is under review. It has now been two weeks and I am still unable to access my money!! I am soooo furious I called several times they asked for documents to be sent over I sent every document they asked for but they still did not give my access to my account and my money. Some of the staff on the phone who I spoke to had zero patience and actually spoke to me quite rudely without answering the questions which I asked. I really need my money they are literally Horrible! “

A 2 star review on Pockit

Lost money with them after a company went into liquidation refused to refund me because it went over 120 days. Absolutely shocking service on the phone when I rang up to enquire the agent simply said they have never had anything like this happened before. I suggest you get some training on it then. Then I got a really snarky reply to my other email saying the agent gave me good advice. Really rude!!!! I sent you a complaint email but never got a reply back. Disappointed in your service and MasterCards too seeing as you passed me to them!!!  “

A 3 star review on Pockit

“  After many emails in all honesty I had

A 4 star review on Pockit

I find Pockit Ltd to be customer focused though they sometimes face little delays in funds transaction but they quickly respond when contacted by online account messaging. The best way to contact them with complaints and inquiries is by online account contact messaging to get any issues resolved. So far I find them to be very good and innovative with their online banking. I have bank with them for over three years and find them progressing. “

A 5 star review on Pockit

“ I’m a self employed and needed a bank…

I’m a self employed and needed a bank account for my customers to transfer there bill into mine but been refused for account by banks so use ask to put money in my friend’s account nd then found Pockit and know my money comes straight in my account, can use my Pockit card everywhere, thank you Pockit 😁  “

Yes, Pockit is safe and takes its safety and security very seriously. This means your money should be safe with Pockit. You provide very little data when you sign up with Pockit and this means there is less information for someone to use if Pockits safety was compromised. Your Pockit account is also password protected and requires a pin and a security question in some cases.

Yes, Pockit is a bank account which is targeted at people who have been refused typical bank accounts due to having no credit history or bad credit. You can set up your Pockit bank account online in as little as 3 minutes.

Where can I pay money into my Pockit account?

Once you deposit cash at the pay point it will usually reflect on your credit file in as little as 30 seconds but sometimes this can take up to 30 minutes to show on your balance and statement.

Do you need ID for Pockit?

No, you will usually not need to provide any ID when you sign up for Pockit. In some cases you may be required to provide an ID when signing up with Pockit. You will need to take a picture of your ID as well as take a selfie.

How long does a bank transfer take Pockit?

Bank transfers usually take up to 2 hours to show in your account but in some cases it can take up to 3 working days to show.

For 2 hours, the bank transfer will need to be done during the working hours.

Does Pockit do direct debit?

How can I unblock my Pockit card?

Can I use my Pockit card abroad?

Yes, you can use your Pockit card abroad but not in Brazil.  Pockit will charge you an exchange fee of 4% . Pockit will cost you £2.25 for you to withdraw money from the ATM.

You can contact Pockit through the Pockit app or by contacting the call centre on: 02033229170 (open from 9 am to 6 pm, Mon-Fri) or contacting them via email at help@Pockit.com.

How does a Pockit card work?

A Pockit card works like any other MasterCard. Your Pockit card should arrive 2 days after you have activated your Pockit account.

How do I order new Pockit cards?

To order a new Pockit card you should contact Pockit via telephone on 02033229170 (open from 9am to 6pm, Mon-Fri) or contacting them via Email at help@Pockit.com and let them know you want to order a new card.

What is Pockit MasterCard?

A Pockit Mastercard is the MasterCard that comes with your Pockit account.  The MasterCard is prepaid which means you will have to load it with money before spending.

Where is Pockit based?

Pockit was founded in 2014 and is based in London.

How do you send money Pockit?

To send money in Pockit, simply log into the app, click transfer out and select UK transfer if you are making a UK transfer, insert the sort code and account number and then execute a transfer.

Where can I use Pockit card?

You can use your Pockit card in every country aside from Brazil due to security reasons.

How do I get my Pockit pin?

To get your Pockit pin you should log into the Pockit account and click on the pin link.,This will display your Pockit pin to you. You can use this immediately for cash withdrawals or to make purchases.

Do you need ID for Pockit?

What bank does Pockit use?

Pockit doesn’t use any bank. It has its own bank infrastructure.

Can I pay a Cheque into my Pockit account?

As far as we know it isn’t possible to pay a cheque into your Pockit account.

Can you set up direct debit with Pockit?

Yes, you can set up a direct debit with Pockit but this will cost you £0.99 for every direct debit that comes out.

How long does a bank transfer take Pockit?

A Pockit bank transfer can take from as little as 30 minutes to as much as 3 working days. Your best chance to reduce the amount of time a bank transfer takes is to do it during a weekday and within working hours.

What Range of Benefits Can Members at Yorkshire Bank Get?

Does Money From Family Count As Income?

Can Money Be Paid Into A Frozen Bank Account?

How Long Would It Take To Spend 1 Billion Dollars?

How Much Interest Can I Get On 184 Million?